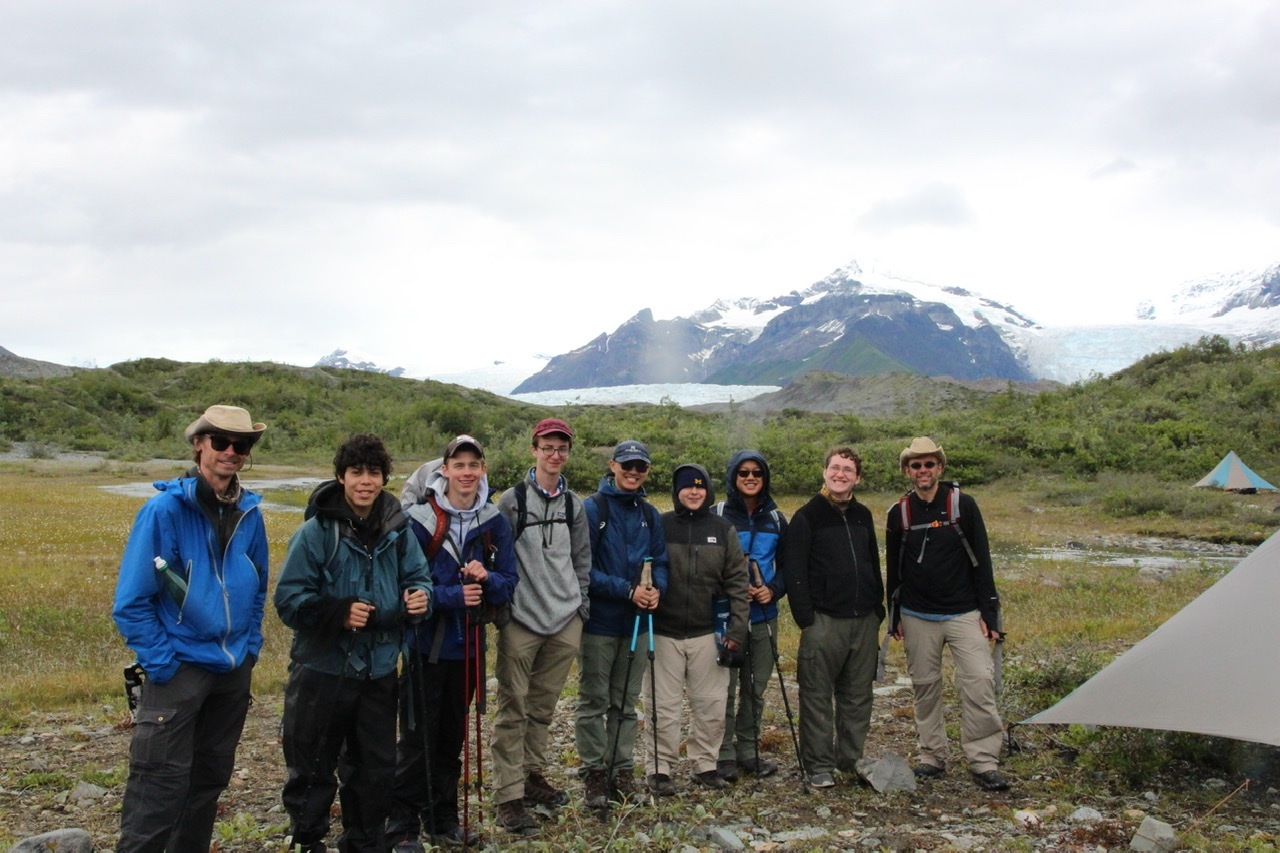 The current pandemic has reshaped so many lives. But despite the human and economic disaster that’s been unfolding, Troop 79 met its commitment to our high school age members to get a shot at summer high adventure. As you may recall from this earlier post, we were thrilled to secure two coveted spots for Philmont in the summer of 2020. Seemed far away at the time. Nobody knew what would happen nine months later…

BSA high adventure trips are intended to be a physical and mental challenge, pushing the Scouts (and adult advisors!) to exceed their self-imposed limits of endurance and leadership. Many in the Scouting community view Philmont as the pinnacle of high adventure – hiking for dozens of miles in the rugged Sangre de Christo Mountains, living on freeze dried food and Spam, carrying everything you need on your back. It’s not a vacation.

When Philmont’s summer 2020 season was canceled on June 4, the troop’s adult advisors sprung into action to organize a suitable replacement. Truth be told, we’d been formulating backup plans for a while, suspecting that Philmont’s modified operations could be blocked by state orders. A Scout is Prepared. After some debate on alternatives, a ten day trip to Alaska rose to the top, including five days of backpacking in the wilderness of Wrangell-St. Elias National Park. Our secret weapon for organizing the trip was a Scout’s parent who lived near Anchorage during the summer. And with the state requiring negative covid test results upon entry, we felt the locals were taking the virus seriously, as we would create our own social pod on trek in the wilderness. 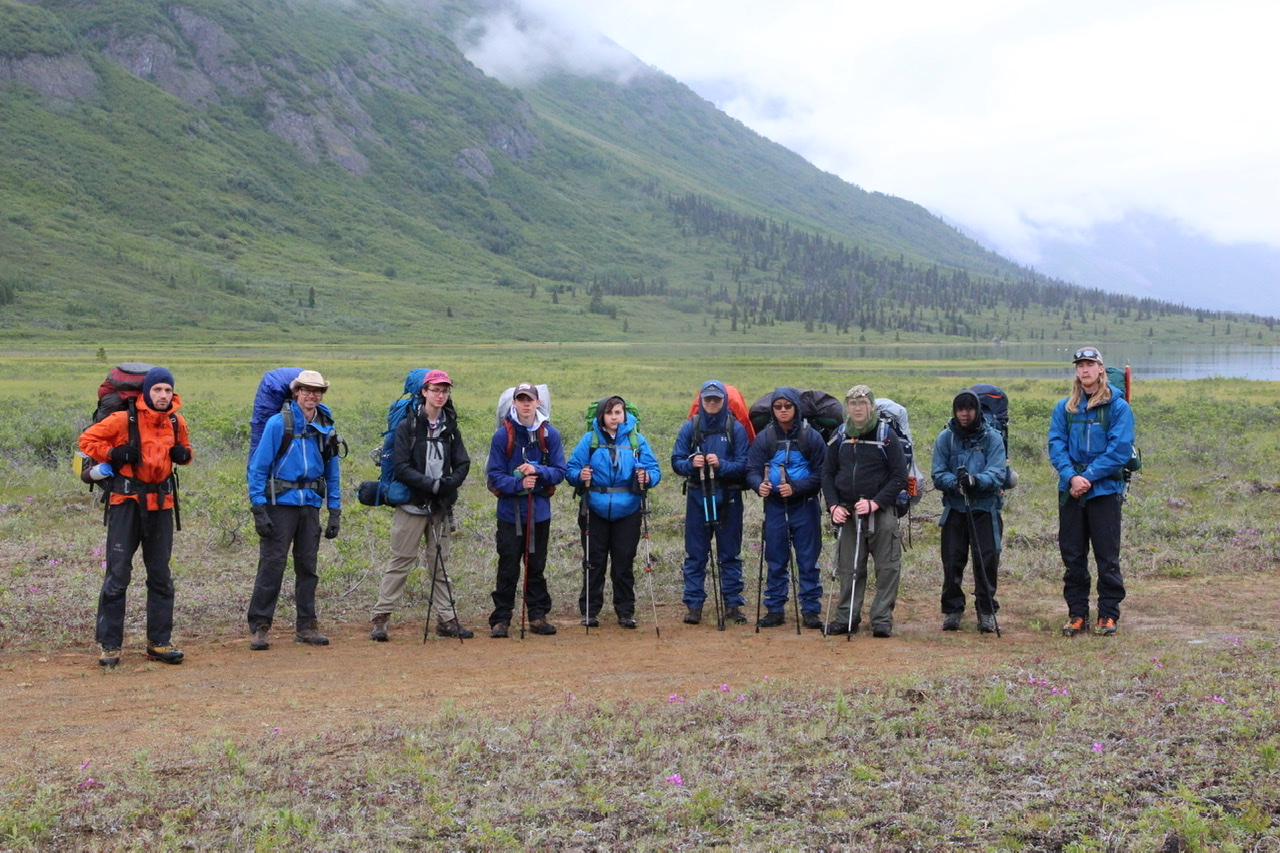 While for many 2020 is a summer of cancelled plans, Troop 79 pushed ahead with our Philmont alternative. Read below for the trip report written by one of the two Crew Leaders, Eagle Scout Andrew Bui.

My statement on Alaska High Adventure

Three years ago, I first stepped foot onto Philmont. I loved the experience and wanted to do it again, but as Crew Leader. Due to COVID, we ended up changing course to Alaska as part of a DIY High Adventure as Philmont was closed. Our final group was Mr. Boyle, Mr. Chambliss, George, Chris, Henry, Max, Craig, James and myself. 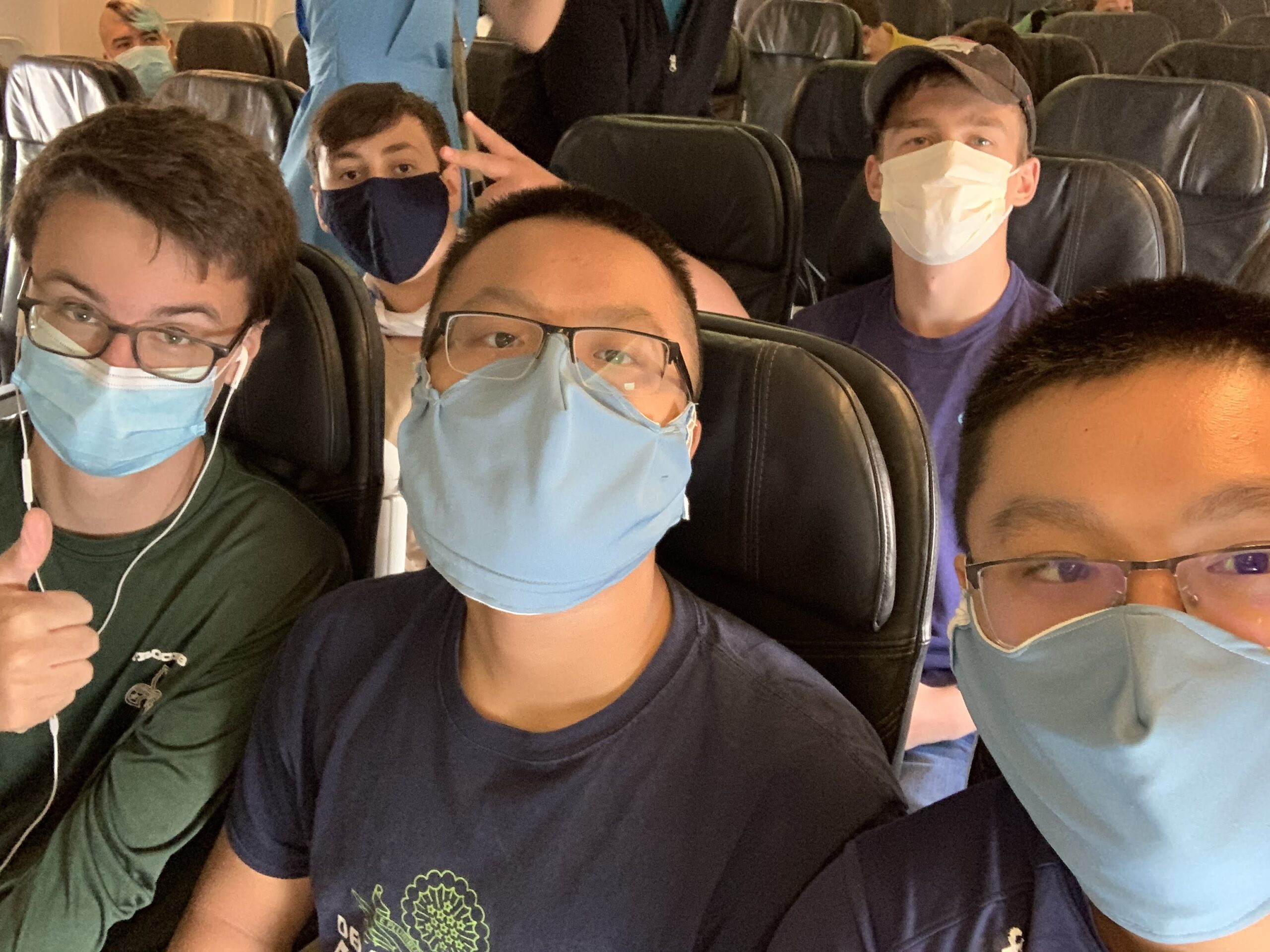 We caught the 6.5 hour plane ride to Anchorage on 7/21/2020. After getting through COVID paperwork and entry forms, we made it to the Eagle River campground where we had hot dogs and reindeer sausage for dinner.

The next day, we hopped into a van to go to Wrangell St. Elias for our adventure. Wrangell St. Elias is bigger than Yellowstone, Yosemite, and Switzerland combined. Our guides were Mike and Jonas, both of whom were fantastic. Since Mr. Boyle asked for the trip to be a high adventure, they were pretty much hands-off for the trip. The scouts backpacked, navigated, cooked, and cleaned.  The first night was at the riverbar and the next morning, we spotted a bald eagle and a moose with her calf.

In Kennecott, we toured the abandoned copper production centers and learned about the history of the copper boom. Then we hiked to our first campsite. It overlooked the glacier we would cross the next day. Dinner was couscous and someone ended up having to drink the last of it to avoid leftovers. Dessert was much better, as everyone loves Oreo cheesecake.

Hash browns were the next day’s breakfast. We walked across Root Glacier in crampons, which gave us extra traction but felt weird doing it for the first time. The glacier was only one mile wide, but it took 5 hours to get across it and get around all the crevasses, glacial streams, and moulins. We had lunch at 3 and were pretty miserable and tired. However, we still had to trek to our campsite for that night, enduring 5 hours of rain and bushwhacking. I was about to call it quits and sleep in a marsh when George pushed me to go across one last hill. There was a valley below and a much better site for sleeping. While not everyone was thrilled arriving into camp at 8:00PM cold and wet, we worked lightning speed to get food ready. That night was Kung Pao noodles and vegetables, which tasted great and was a huge morale boost. We were in Donoho Basin and were exhausted, so we all had a good night’s sleep. 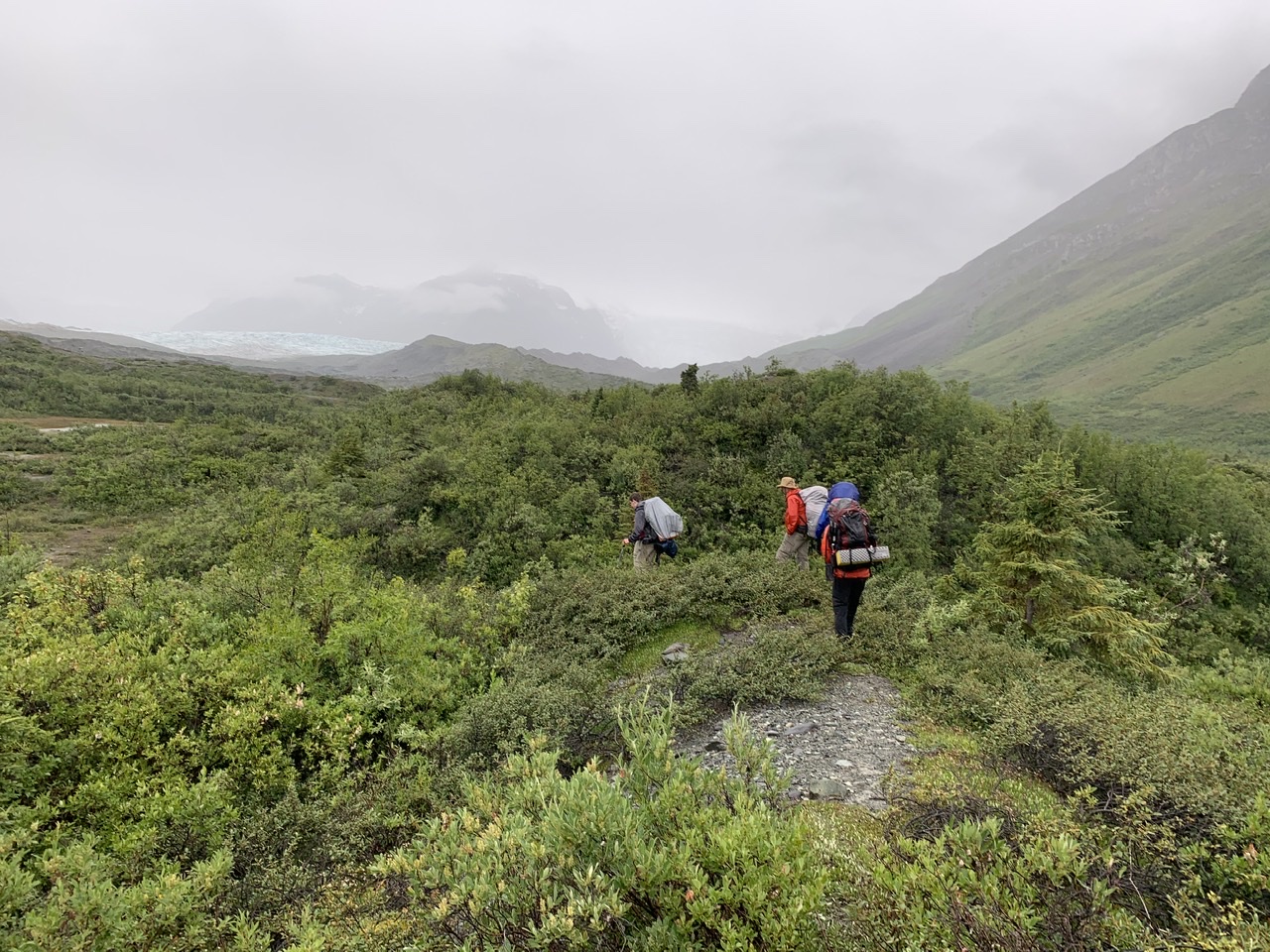 On 7/26 (Day 3), the crews took a day hike on the moraine of Gates Glacier, a neighboring glacier. Nobody wanted to put on crampons again. The hike was short, and that was intentional to give ourselves a rest. Dinner was chili and mashed potatoes, and everyone enjoyed it. Despite being stuffed, dessert was two servings of pudding.

For breakfast the next morning, it was oatmeal combined with some hot cocoa mix, something I learned at Philmont. We dumped an entire gallon bag of oatmeal in, which was apparently twice the amount we were supposed to eat. We still finished all the food. Then, I naviguessed us back across Root Glacier. We hiked back to our first night’s campsite because of ice climbing the next day.  The return trip was completed in two less hours, as we recognized the path.  Dinner was fried rice and dehydrated vegetables, which was the perfect consistency. 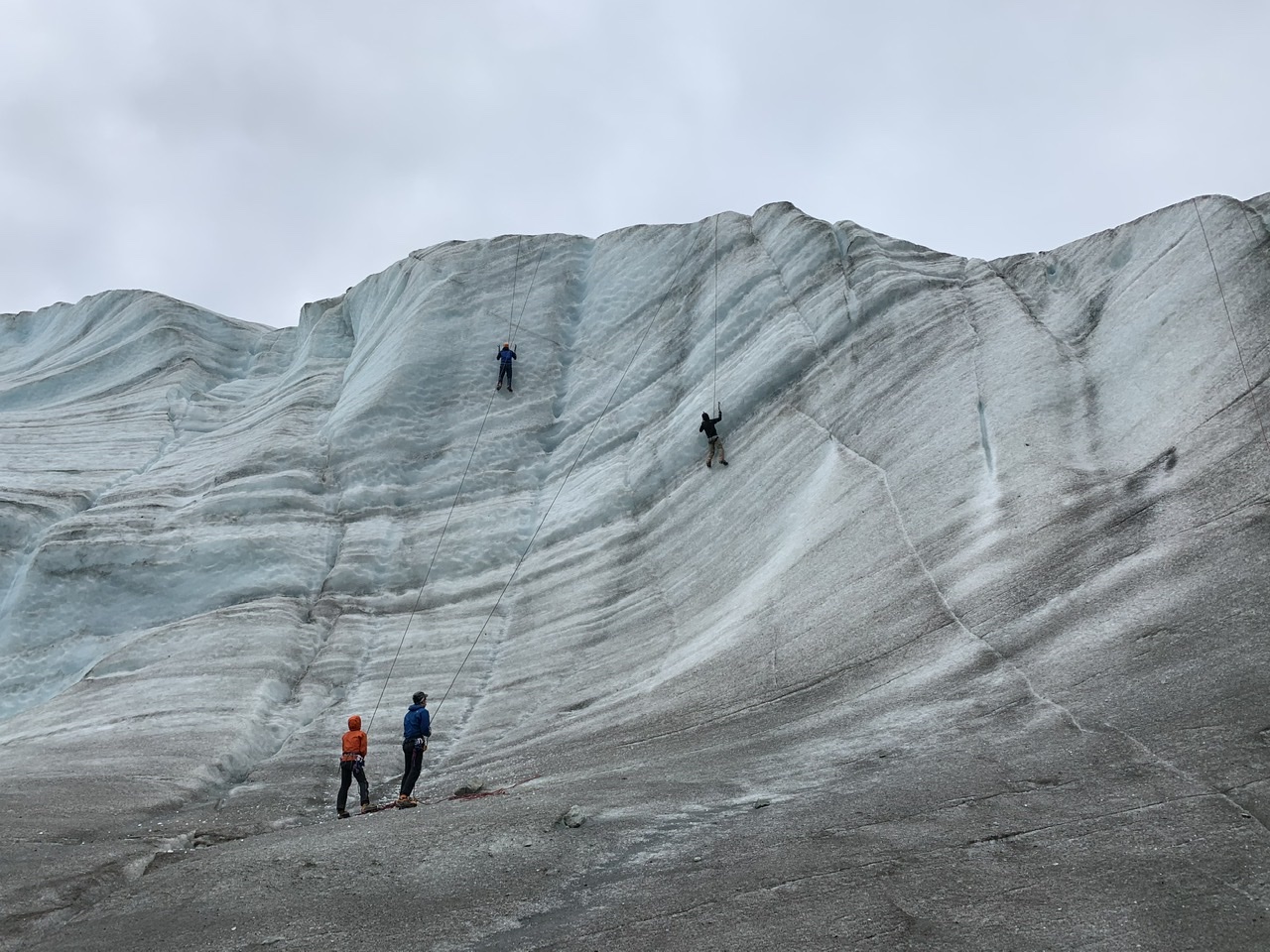 On 7/27 (Day 4), we all ice climbed. Breakfast was ramen, and lunch was granola and Cheerios. We were joined by two other guides, Jeremy and Eli who helped us with ice climbing. There were three walls to climb:  the beginner’s wall, the endurance wall because it was the tallest, and the technical wall.  It’s technical because of the overhangs. Everybody climbed at least once and some of us climbed two or even three walls. At the top of the center wall, I was feeling adventurous and took a selfie at the top. You can even see the rest of the guys down below. 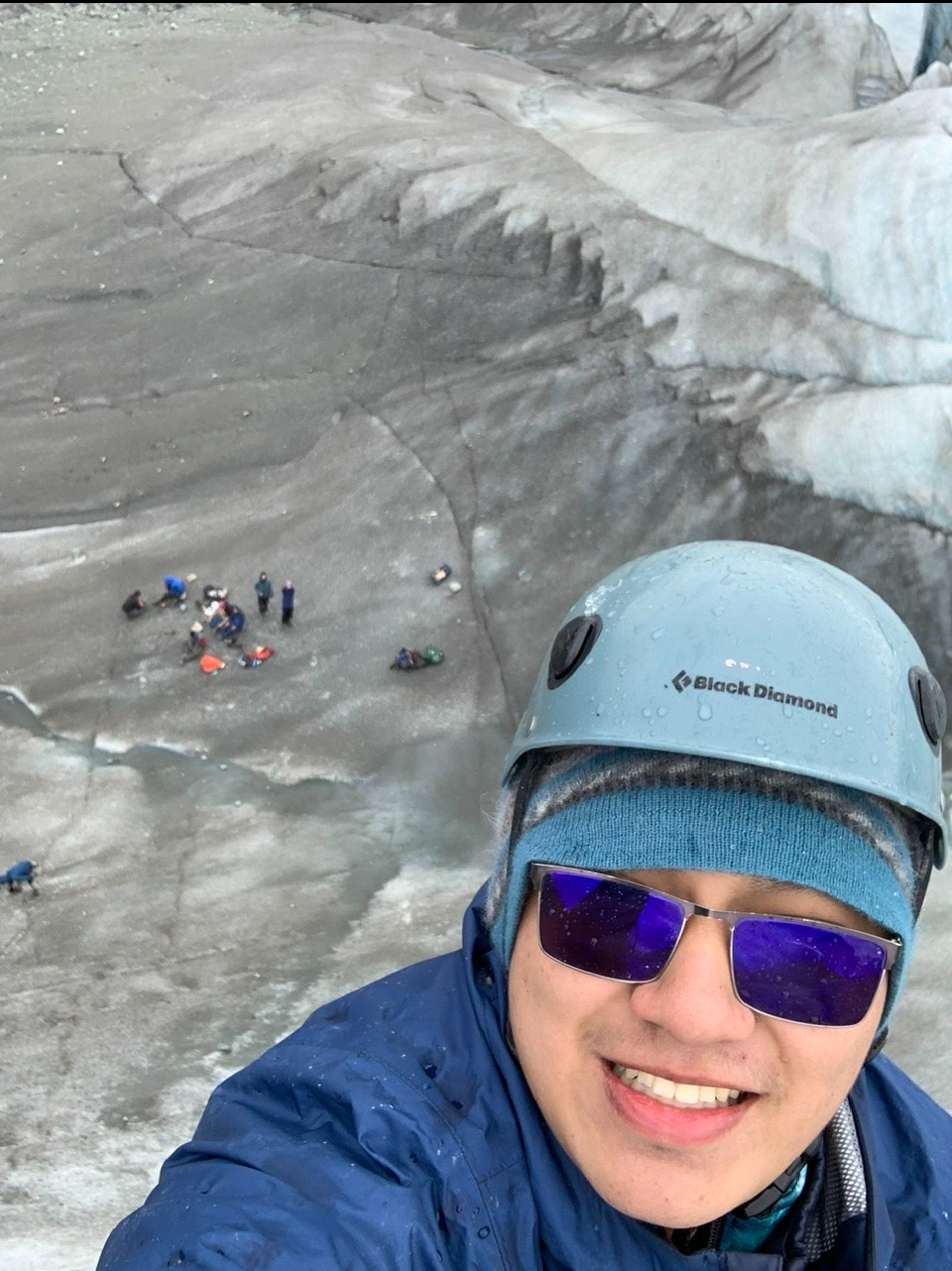 The last climb was into a moulin. A moulin is where glacial streams all converge. Those who were feeling up to it were lowered down, and we climbed back out. The inside of a moulin is full of pretty blue ice, although that ice is very hard to stick crampons in. It was the biggest test of our technique and our will to continue. Nobody needed to be rescued, and that was the best part of the climbs. 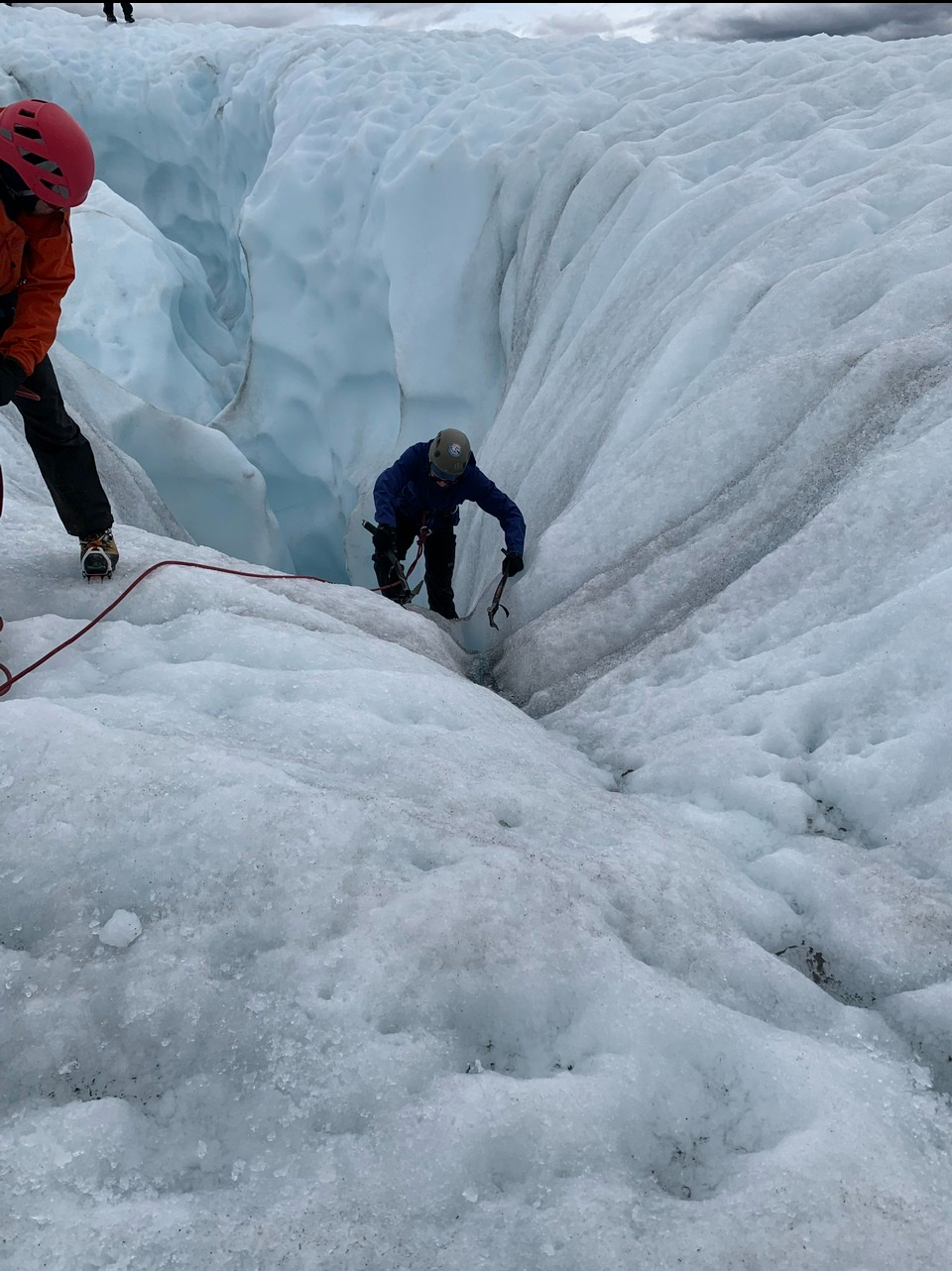 Once we were done with climbs, we headed back to the riverbar in McCarthy. Dinner was beef stroganoff with peas and bell peppers. Dessert was Reese’s pudding. In the food storage area, they have a full map of Wrangell St. Elias. If you thought what I mentioned was huge, that small area between Mr. Boyle’s fingers is where our trek went. Wrangell St. Elias is huge. 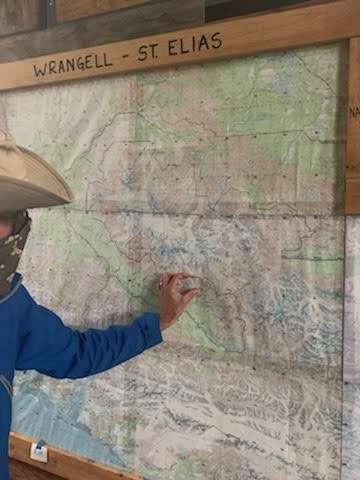 Unfortunately, Nothing Gold Can Stay and on 7/28, we left St. Elias, Mike, and Jonas. At the Schechter’s cabin, we took showers for the first time in a week. We also slept in a climate controlled place, which was a nice change from the tents in 50F overnight temp.

On the morning of 7/29, half of us hiked up Mt. Aleyaska. The view was great, although we didn’t see any bears (which we were all hoping for). The wildlife cruise was five hours long, and we all were able to see sea lions and sea otters in the wild.  One of the glaciers we passed was calving, so everyone saw a hunk of it fall off and then heard a low rumble from hundreds of tons of ice falling into the sea. After the cruise, we headed to Anchorage airport. Our trip was 10 days/ 9 nights long and while it wasn’t Philmont, it is something I will remember for a long while.

Member of our Google group? Click here for more photos.