Another October, another beautiful weekend for a bike trip through the Chicago suburbs.  Apparently the members of the Patrol Leader’s Council thought last year’s cycling event was worth redoing.  So we did!  Like in 2017, a hardy group of older Scouts started at the east end of the IL Prairie Path in Forest Park and pointed their handlebars west for a 25 mile ride.

Meanwhile, back at HQ, the 10 mile riders were literally bouncing off the wall they were so excited to go!  Both groups met up in Wheaton to start the next segment of the ride to camp as the SAG wagon baton was passed. Finally rolling into Camp Blackwell, the combined 10 & 25 mile riders paused for a group photo at their nice site on a little knoll with views of the surrounding fields beyond.

After going about the usual business of setting up camp, most everyone took advantage of some “feet up” time to rest their legs.  Until it was time to make dinner.  The patrol menus were just right for a chilly fall evening: foil meals with burger & potato or tomato soup with grilled cheese.  This year’s dessert was a new one – cherry/apple cobbler using a corn bread mix.  Perfect job for a couple Scouts to assist while the sunset lit the sky on fire. As the heavens faded to black, the Scouts headed to a nearby field to play “Commando”.  Hot cobbler and stories around the toasty fire were waiting for their return.  Nothing like a good day of fun to wear everyone out just enough to call it quits around 10PM.

Even a beautiful fall weekend of camping has to end some time.  With the bikes and gear packed after a hearty breakfast, the Scouts were ready to head home.  Many thanks to the adult leaders who accompanied the Scouts on the trip, as well as the parents who drove out to Blackwell to help transport the Scouts back to the city.

Member of our Google Group?  Click here for more photos.

Besides just having fun, our Scouts contribute to their community in many ways.  Whether it’s supporting the annual Old Town Art Fair or the many cheerful hours of individual service, Scouting includes serving.  The service project required to earn the Eagle Scout rank, however, may be the most visible example.

As you know, it takes Scouts several years to hike the path to Eagle, and not many make it to the summit.  Earning merit badges, demonstrating leadership, and living by the Scout Oath and Law are all part of the program.  Read on to hear about a few more of Troop 79’s Scouts working towards this goal.

August 25 I completed my Eagle Scout project at Andrew Jackson Language Academy last Saturday, It was a daunting task of putting their library back together. We worked for 5.5 hours (that’s a combined total of 132 hours of work!) and shelved thousands of books. 23 people helped to make this project a success, and because of it, 565 kids will have a library to walk into on Tuesday.

A special thanks goes to Troop 79 scouts and parents. 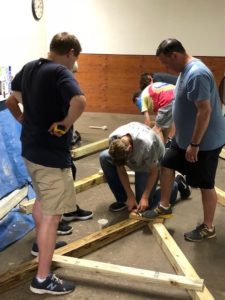 September 2 Thank you so much to everyone who came out and helped. Because of you, we were able to build both swing sets and the refrigerator shelter as well as paint them.

Patchwork Farms, a non-for-profit organization that helps provide healthy, locally grown produce for little to no cost, has seen the finished project and are very happy with the results!

Again thank you so much to everyone for your help. 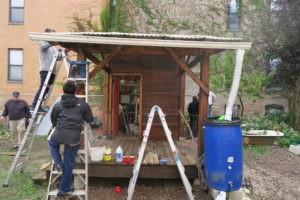 September 29  My eagle scout project worked with the Ginkgo Organic Gardens, a community garden located in the Uptown neighborhood that has worked with victims of the HIV/AIDS crisis for over two decades and provided organic produce to the community. The Scouts built a new storage structure, revarnished a gardening shed, painted a bench, and worked around the garden. Overall, the project was a major success and will benefit the gardens for years to come.