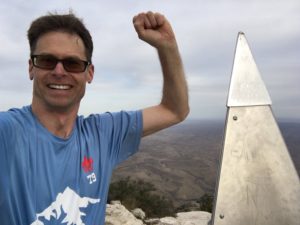 How many people do you think you pass every day and don’t know they’re part of Scouting?  What if you wore your Troop 79 pride in public?  Well, your own Asst. Scoutmaster had the chance to do that recently.  The reaction was terrific!

On a trip to the Guadalupe Mountains National Park, I wore the custom T-79 Philmont crew shirt from last summer’s expedition.  On the trail to my backcountry camp, I stopped to talk to anyone who would engage in a little hiking banter.  If nothing else, to catch my breath hauling a 30lb pack up 3,000 vertical feet.

One of those chats was with Steve, a former Scoutmaster of 25 years and his wife, Denise, training for a trip to the Grand Canyon.  What caught my eye was Steve’s decorated hiking stick complete with the Philmont Bar PS brand.  It turned out they were headed for the same campsites to make an attack on Guadalupe Peak, 8,751 feet above sea level.

A terrific conversation ensued.  What became obvious, whether you’re from a town of 1,600 people in the middle of Texas, or a big city in the Midwest, is how many of our Scouting stories were similar.  Whether reveling in the laughs, dealing with bugs or rain, or toughing it out on a long hike, we both saw Scouting through a similar lens.  But most of all, it came down to doing things that were just a little more than you thought you could do.

And that’s where the confidence comes to conquer whatever life throws your way.  Hike on!

When you think spring in Chicago, I guess you need to be prepared for rain, wind and temps near freezing. Regardless of what the calendar says, it sure felt like winter just couldn’t let go of its icy grip on this place.

Thankfully the good folks at Camp Dan Beard in the Cook County Forest Preserve have recently upgraded the property to include a covered pavilion, complete with fire pit and yes, electric lighting.  Now before anyone makes any unkind comments about Scouts having lost their edge, remember everyone was still sleeping on the ground in tents.  But it sure was nice to have a roof over our heads for cooking & hanging out!

And while not hunkered down under cover, the Scouts had an ambitious agenda.  This included a rather muddy ~3 mile hike out to the DesPlaines river and back, a 1 mile orienteering course and an impromptu scavenger hunt.  Don’t ask what they were looking for…

Dinner was prepared and served patrol style, meaning the Scouts do their own grub.  And while it may not be as delicious as mom’s home cookin’, food always tastes better when you’re chilly and damp after an afternoon exploring the drizzly woods.  Dutch oven pineapple upside down cake, making its third appearance in as many overnights, capped off the menu.

No Scout overnight is complete without the usual camaraderie around the campfire, which was fueled by the remains of Mr. Boyle’s cedar fence and some free seasoned hardwood.  A Scout is thrifty!  This weekend’s entertainment included a presentation of meme-themed charades and an impromptu chorus of “Hail Owasippe” to break up a particularly silly chain of conversation.

Many thanks to Mr. Keats for his camp stove, cheerful and patient leadership, and to Elijah and Edward for running the show.  Very glad we decided to press ahead with this one despite the forecast.

Member of our Google Group?  Click here for more photos.