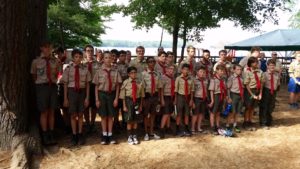 It was an eventful week at Camp Owasippe, according to camp coordinator, Mr. Carter.

As always, Troop 79 represented ourselves well, winning the Camp Cup, collecting a record number of merit badges, and chillin’ in our chairs around the fire.

The weather started out unusually hot and sticky. On Sunday, we checked in, but had to endure a downpour that nearly knocked out the opening campfire. Fortunately, the storm passed through just early enough, contributing to the fun atmosphere of the festivities. Otherwise we avoided any more rain. Though the steamy weather came back a bit in mid-week, it became very pleasant as the week ended, even being a little on the chilly side the morning of departure.

The Camp Cup consisted of daily challenges. We won canoe swamping and the waiter challenge, finished strong in gaga ball and the dry match race, and did just well enough in the frozen T-shirt competition to win by a score of 108 to 107. Expect to see the Cup at the next Court of Honor.

Scoutmaster Mr. Keats, Mr. Recinto, and Mr. Carter completed enough of the requirements (taking a 30-minute nap is a requirement) to get leader recognition. We also appreciated the assistance of Mrs. Smith and Mr. Barich.

Andrew completed his Order of the Arrow ordeal. Congratulations!

Pathfinder Scouts learned about the details of Scouting and moving up ranks, and finished with Swimming and First Aid merit badges. Older Scouts took many newly-offered badges. Much time was spent hanging around the Trading Post and visiting with Elijah.